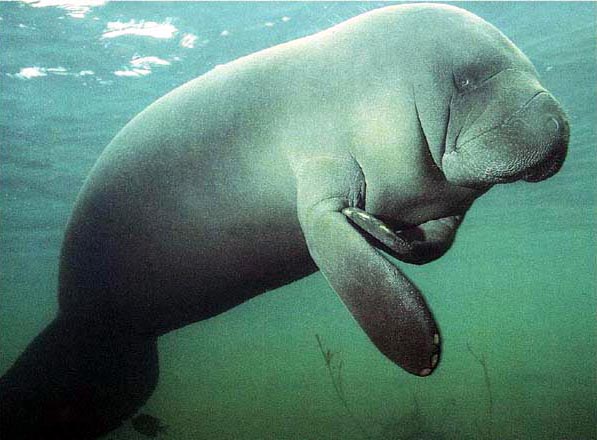 Manatees and dugongs are marine mammals of the order Sirenia. They originated in the middle Eocene period around 45 to 50 million years ago. They are gentle, plant-eating herbivores sometimes nicknamed "sea cows". The name manatee comes from the Haitian word manati. Today, their closest living relatives are elephants [Proboscideans], hyraxes [Hyracoidea] and aardvarks [Tubulidentata]. Manatees are classified as [sub-]ungulates, even though they live in the water. Their thick-skinned, streamlined, almost hairless bodies have forelimbs modified into flippers. The tail is enlarged and horizontally-flattened.

Manatees spend most of their time feeding, resting or travelling. They prefer shallow saltwater bays, slow-moving rivers, canals, estuaries and coastal waters. Manatees are quite agile creatures. A manatee uses its flippers and tail to steer itself. It moves its tail up and down to propel its body forward through the water. Manatees can swim vertically and upside down; they can do rolls and perform aquatic somersaults. Their extra-dense bones enable them to stay suspended at or below the water's surface.

Manatees eat over 60 different species of aquatic and semi-aquatic plants. Their diet includes manatee grass, turtle grass, various species of algae, mangrove leaves, and water hyacinths. They may consume 10% of their body weight daily in vegetation. Their digestive system allows the bacterial breakdown of cellulose in the hind-gut. To accommodate the great volume of high-fiber food they eat, manatatees have intestines up to 150 feet long.

The jointed bones of manatee's flipper serve a function similar to a human hand. Their structure helps the manatee move through the water, bring food to its mouth, and hold objects. Three or four nails are found at the end of each flipper. Manatees can't turn their heads: unlike most mammals, they have six rather than seven cervical vertebrae, so they must turn their whole bodies to look round.

Manatees have "marching molars", their only kind of teeth. Throughout a manatee's life, the molars are constantly replaced, an adaption to their diet of abrasive vegetation. Manatees use their muscular lips to tear plants and guide food to their lips - not unlike the way an elephant uses its trunk. Manatees normally feed in the water, whether on the surface, off the bottom, or in water columns; but they sometimes haul themselves partially out of the water to eat bankside vegetation, or to crop overhanging branches.

Manatees have a large, double-nostriled snout. The upper lip is large and flexible, with whiskers ("vibrissae") on its surface. Each vibrissa has its own separate follicular blood supply and nerve endings.

Manatees can grow over 13 feet in length and weigh up to 3,500 pounds. Lengths of 10-12 feet and 1000 -1500 pounds for adults are more typical. In spite of their size, manatees have relatively little fat; they are a sub-tropical species very susceptible to cold. Their eyes are small, but eyesight is good. Manatees have a nictitating membrane which can be drawn across the eyeball for protection. Hearing is good too; manatees have large ear bones.

Manatee vocalisations take the form of chirps, whistles and squeaks. Peak energies are in the 3-5 kilohertz range. Communication is particularly frequent between mother and calf, or when the water is turbid. Manatees vocalise to express fear, anger, pain or sexual arousal. They are also adapted to hear infrasound frequencies below 20 hertz. The manatee brain is not very convoluted, but it has an unusually high ratio of grey-to-white matter.

Swimming speeds of up to 20mph have been recorded, but normally manatees prefer to cruise at speeds of at 2-6mph. They will typically surface to breathe through their nostrils every three to five minutes. When they are using a great deal of energy, however, manatees may surface for air as often as every 30 seconds. They can stay submerged for up to 15-20 minutes.

Manatees have a slow reproductive rate. Twins are rare; when they do occur, one calf is suckled on each nipple, located just behind each of the flippers. More normally, one calf is born every 2-5 years. At birth, the calf is around 3-4 feet long. Guided by the mother, it swims to the surface to breathe. The new-born calf weighs about 60-70 pounds. It starts suckling - underwater - a few hours after birth.

The manatee gestation period is over a year, usually around 13 months. Mothers nurse their young for a long period. When they swim together, the baby may hold onto the mother's back with its tiny flippers. The calf will remain dependent on its mother for up to two years. Mother and calf communicate by continual chirps and squeaks. The calf starts eating plants after a few weeks old; it is born with molar and pre-molar teeth. Female manatees are sexually mature by around 6-7 years; males by perhaps 9 years.

Copulation, in various postures, takes place in the water. An oestrous female may be pursued for weeks by several ardent males who compete to mate with her.

Manatees are migratory animals adapted to both saltwater and freshwater habitats. Off the USA, West Indian manatees (Trichechus manatus) are concentrated in Florida in the winter. In the summer months, they can be found as far west as Alabama and as far north as Virginia and the Carolinas - very rarely, even further north. Antillean manatees (Trichechus manatus manatus) live along the coastal waters of Mexico, Central America, and the upper northern coast of South America from Venezuela to Brazil. They can also be found around islands of Cuba, Haiti and the Dominican Republic, and Puerto Rico. The closely related Amazonian manatee (Trichechus inunguis) is found in the River Amazon and its tributaries in northern Brazil. The Amazonian manatee is the smallest of the three manatee species and lives exclusively in freshwater habitats. A few still live in Ecuador, Peru, and Colombia. The West African manatee (Trichechus senagalensis) is found across the Atlantic in the tropical and sub-tropical waters of equatorial Africa from Senegal to Angola.

Manatees can live up to 60 years. They may occasionally be disturbed by crocodiles, and suffer from habitat-degradation, but their only significant predator is Man. 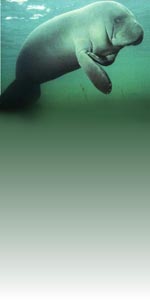